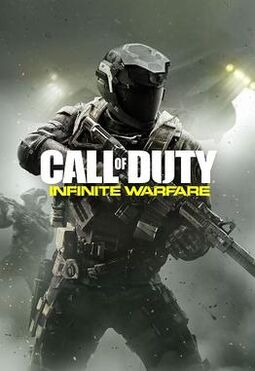 Call of Duty: Infinite Warfare is a 2016 first-person shooter video game developed by Infinity Ward and published by Activision. It is the thirteenth installment in the Call of Duty series and was released worldwide for Microsoft Windows, PlayStation 4, and Xbox One on November 4, 2016.

Development of Infinite Warfare began during 2014. It is the first title by Infinity Ward under the new three-year development cycle for the Call of Duty series. The game's campaign is centered around a battle for the Solar System, which the Settlement Defense Front (SDF), a hostile force who are the main antagonists, are attempting to take over. The player takes control of Lieutenant Nick Reyes of the Special Combat Air Recon (SCAR). They have their own transforming fighter, named "Jackal", that they can customize as well as a central hub ship named Retribution.

Infinite Warfare's announcement trailer was noted for its strong negative reaction; it was the second-most disliked video on YouTube at the time. Commentators attributed this to a botting campaign by both fans of rival game Battlefield 1 as well as Call of Duty fans expressing frustration at the direction the series had taken, specifically that the game and its predecessors had futuristic settings. Nevertheless, the game received generally positive reviews upon release; critics praised the single-player campaign, which was seen as a considerable improvement over that of Black Ops III and the Zombies mode, while the multiplayer mode was criticized for its lack of innovation. It was named as Best shooter at E3 by Game informer and was nominated by several awards, winning one of them. Infinite Warfare underperformed in sales compared to previous Call of Duty titles, though Infinite Warfare was the top-selling game in the US in November 2016.