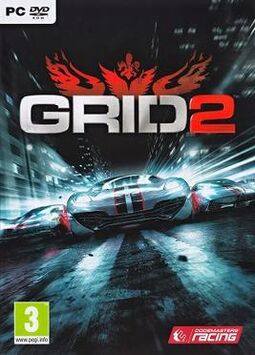 Grid 2 is a racing video game developed and published by Codemasters for Microsoft Windows, PlayStation 3, Xbox 360. It is the eighth game in the TOCA series. Feral Interactive released the Reloaded Edition for OS X in September 2014 The game includes numerous real world locations and cities such as Paris. It also includes motor vehicles spanning four decades. In addition, it includes a new handling system that developer Codemasters has dubbed 'TrueFeel', which aims to hit a sweet spot between realism and accessibility. Races do not include a first person cockpit view. The popular gamemode "Drift" was shown in a gameplay preview by Codemasters.

Drivers are given certain cars before some race modes, and can unlock others through other vehicle challenges. Car liveries can be customised by the player, using preset graphic designs adapted with colours or varying shades.