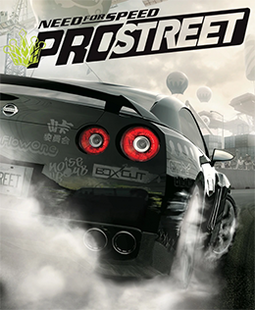 Need for Speed: ProStreet is a 2007 racing video game developed by EA Black Box and published by Electronic Arts. It is the eleventh installment in the Need for Speed series and a follow-up to Need for Speed: Carbon. Unlike its immediate predecessors, which focused on the contemporary illegal street racing scene, ProStreet focuses on legal circuit races that take place on closed tracks. The game blends elements of both sim and arcade racing games, requiring players to customize and tune cars for various race modes. Most races take place in real-world locations such as the Portland International Raceway, Mondello Park, and Autopolis.

Developed over the course of almost two years, ProStreet was conceived by the same team who led the production of Need for Speed: Most Wanted. It is the first Need for Speed game that was primarily developed for high-definition consoles such as the Xbox 360 and PlayStation 3, although versions for Microsoft Windows, PlayStation 2, and Wii were also released. The game features a new physics engine, which allows cars to handle in a more realistic way and take damage in accidents, and introduced a wind tunnel feature where players can see how their car's aerodynamics work. Musician Junkie XL was hired to compose the score of the game. Several downloadable content packs were released for the game, expanding its content with more cars, tracks, and races.

ProStreet received mixed reviews from critics, who generally criticized the lack of open world gameplay of its predecessors. The game's numerous online features and car customization options were highlighted as some of its strongest features. Although ProStreet sold more than five million units worldwide, it did not meet sales expectations according to Electronic Arts. Portable adaptations for mobile phones, Nintendo DS, and PlayStation Portable were released to varying success. These differ greatly from their co