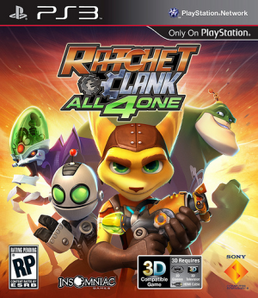 Ratchet & Clank: All 4 One (previously known as Ratchet & Clank: 4-Play) is a platform video game for the PlayStation 3 developed by Insomniac Games and published by Sony Computer Entertainment in October 2011. It is the third spin-off from the Ratchet & Clank Future series.

Upon release, the game received positive reviews, with praise aimed at the soundtrack, story, graphics, humor, voice acting, combat and gameplay, though criticism was aimed at the frustrating partner AI and glitches. It was nevertheless a commercial success, selling 1.5 million copies worldwide.