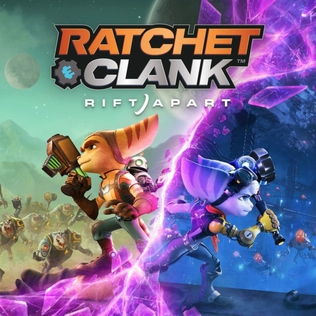 Ratchet & Clank: Rift Apart is an upcoming third-person shooter platform game developed by Insomniac Games and published by Sony Interactive Entertainment for the PlayStation 5. The game will take place after the events of Ratchet & Clank: Into the Nexus.[1] According to the studio, it will also have a stand-alone storyline that will appeal to newcomers of the series.[2][3][4] It was announced at the PlayStation 5 reveal event in June 2020. The game will be released on June 11, 2021.

Ratchet & Clank: Rift Apart will explore the story of the titular characters as they traverse across worlds in multiple realities to stop a villainous emperor from exploiting the catastrophic dimensional collapse caused by a malfunctioning device to instigate a plan of exterminating organic life in all universes.[5]

The game shares many gameplay similarities with Ratchet & Clank (2016) and other entries in the series. The main playable character is Ratchet. He is accompanied by his robotic friend and sidekick Clank, who is hung on his back. There will also be a playable female Lombax.[6] The player navigates Ratchet through diverse environments across a multitude of levels, defeating enemies with an array of varied weapons and gadgets, and traversing obstacles to complete key mission objectives.[7]

This will be the first game in the series to introduce the concept of real-time near instantaneous travel between different areas, planets and other worlds within gameplay scenes via a system of inter-dimensional portals.[8] In order for the player to utilize this feature, a new mechanic dubbed the Rift Tether is introduced in Ratchet's arsenal that pulls him from one side of the portal to another, facilitating that travel functionality with great ease.[8] The game will take advantage of the PlayStation 5's Dualsense controller, Tempest Engine and dedicated ray tracing hardware to support advanced haptic feedback, 3D spatial audio and real-time ray tracing effects.[9][10] The game will feature the return of planets explored in previous entries alongside their alternate counterparts, as well as new ones.[11] With the increased processing power and inclusion of a custom solid-state drive storage in the PlayStation 5, the game will feature a greater variety of enemies, visual effects, and objects within gameplay scenes.[12] Enhancements in the game design aim to significantly reduce loading times when jumping between worlds, allowing for a seamless and immersive gaming experience for the player.[13][14] In an interview with Famitsu, Insomniac Games confirmed that Ratchet & Clank: Rift Apart will feature a 4K-resolution mode running at 30 frames per second and a 60-frames-per-second "performance mode", running at a lower resolution.[15][16] The game will also feature support for high dynamic range.[17]

Ratchet & Clank: Rift Apart was revealed at Sony's PlayStation 5 reveal stream on June 11, 2020.[18] The game is being developed exclusively for the PlayStation 5.[19] At Gamescom's Opening Night Live on August 27, 2020, Insomniac Games showcased an extensive 7-minute gameplay demo for the title as part of the promotional efforts for PlayStation 5.[20] It will be released on June 11, 2021.[21]