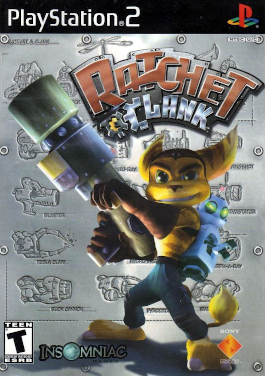 Ratchet & Clank is a 3D platform video game developed by Insomniac Games and published by Sony Computer Entertainment for the PlayStation 2 in 2002. Ratchet & Clank is the first game in the series and precedes Going Commando.

The game follows the anthropomorphic character Ratchet meeting the robot Clank on his home planet. Clank discovers that the villainous Chairman Drek of the Blarg race plans to create a new planet for his species, destroying other planets in the process. Clank convinces Ratchet to help him in his mission to gain the help of the famous superhero Captain Qwark.

The game offers a wide range of weapons and gadgets that the player must use to defeat numerous enemies and solve puzzles on a variety of different planets in the fictional "Solana" galaxy. The game also includes several mini-games, such as racing or hacking, which the player must complete to proceed. The game was very well received by critics, who praised the graphics, gameplay, voice acting, audio, soundtrack and comedic approach to the story; some criticism was levelled at the camera, the characterization of the lead characters and the low level of difficulty in early stages.

Fourteen years later, a film based on the game was released in theaters on April 29, 2016 along with a PlayStation 4 reimagining based on that work released earlier on April 12, 2016 in North America.