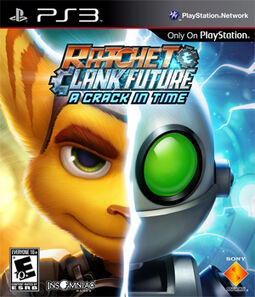 Ratchet & Clank Future: A Crack in Time (known as Ratchet & Clank: A Crack in Time in most PAL countries) is a 2009 platform game developed by Insomniac Games and published by Sony Computer Entertainment for the PlayStation 3. It is the sequel to Tools of Destruction and Quest for Booty. The game was released for the PlayStation 3 in North America on October 27, 2009, in Australia on November 5, 2009 and in Europe on November 6, 2009.

Upon release, the game received positive reviews from critics, with praise particularly aimed at the story, visuals, and gameplay. A fourth and final installment for the Future series, titled Ratchet & Clank: Into the Nexus, was released in November 2013 for the PlayStation 3.