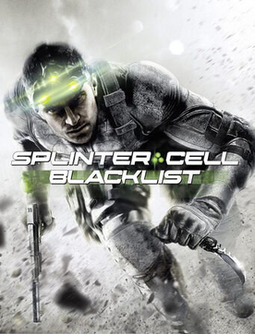 Tom Clancy's Splinter Cell: Blacklist is an action-adventure stealth video game developed by Ubisoft Toronto and published by Ubisoft. The seventh installment of the Tom Clancy's Splinter Cell series, it is the sequel of Splinter Cell: Conviction. The game was released worldwide for Microsoft Windows, PlayStation 3, Wii U, and Xbox 360 in August 2013. In the game, players control Sam Fisher, a spymaster working for the Fourth Echelon, in a mission to stop the Engineers, a group of terrorists which is trying to coerce the United States into recalling all of its troops stationed abroad. Blacklist's gameplay is similar to its predecessors, with players tasked with completing objectives and defeating enemies. Blacklist marks the return of the asymmetrical multiplayer mode Spies vs. Mercs, which was introduced in Pandora Tomorrow.

It is the first title developed by Ubisoft Toronto, a studio founded by Ubisoft in 2009. The game was directed by Maxime Béland, who had worked on Conviction, and produced by Jade Raymond. The game endeavors to combine elements of its predecessors, including the action focus of Conviction and the stealth focus of the older games. To prepare for this game, Béland studied reviews and feature lists of the latter. Blacklist is the first Splinter Cell game starring Eric Johnson as Sam Fisher, since series veteran Michael Ironside was unable to reprise his role after being diagnosed with cancer. The later-announced Wii U version was developed by Ubisoft Shanghai, which also developed the game's multiplayer.

Blacklist's pre-release reception was generally positive, despite criticism of its new voice actor. The game received generally positive reviews when it was released, with praise for its level design, story, gameplay, combat, soundtrack and multiplayer mode. However, criticism was directed at its dated graphics, lack of challenge and ending. Special criticism was also directed toward the voice casting choice of Sam Fisher for sounding too young when compared to Michael Ironside's performance. It also underperformed Ubisoft's sales expectations, with sales of two million copies three months after its release.