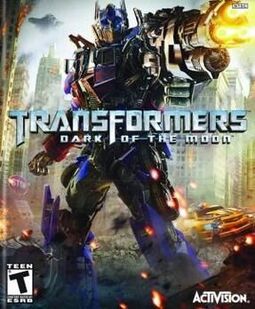 Transformers: Dark of the Moon is an action-adventure video game based on the 2011 film of the same name, itself part of the Transformers franchise, which depicts the conflict between the Autobots and the Decepticons, both factions of the eponymous alien race, who can change their form into various vehicles. The game serves as a prologue to the film, and is the sequel to 2009's Transformers: Revenge of the Fallen. A spin-off and indirect sequel, Transformers: Rise of the Dark Spark, part of which is based on the film Transformers: Age of Extinction, was released in June 2014.

There are three different versions of the game: one for the Xbox 360 and PlayStation 3, one for the Wii and Nintendo 3DS, and one for the DS, which were all released in June 2011; the former was developed by High Moon Studios, who previously worked on Transformers: War for Cybertron, while the second one was developed by Behaviour Interactive. All these versions were published by Activision, while Electronic Arts released mobile versions of the game for Symbian, iOS and BlackBerry.