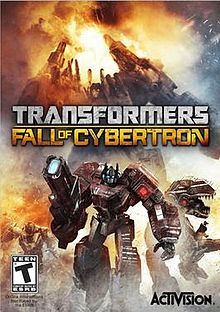 Transformers: Fall of Cybertron is a third-person shooter video game based on the Transformers franchise, developed by High Moon Studios and published by Activision. It is the sequel to the 2010 video game Transformers: War for Cybertron, and directly follows the events of that game, as the Autobots struggle to defeat their Decepticon foes in a civil war for their home planet of Cybertron. The game was released on August 21, 2012, in North America and on August 24, 2012, in Europe for Microsoft Windows, PlayStation 3, and Xbox 360. In 2016, it was released for PlayStation 4 and Xbox One on August 8, in Australia and on August 9, in North America. Mercenary Technology developed the game's Windows version, while Fun Labs developed the PlayStation 4 and Xbox One versions.

The game tells the story of the Transformers, fictional robotic life forms, and the final days of conflict on their home planet of Cybertron. An origins subplot for the Dinobots is also told, reimagined from the Transformers: Generation 1 continuity. Other subplots also tell an adapted story for several characters. Some of the voice cast from the 1984 series The Transformers return to reprise their roles, including Peter Cullen as Autobot leader Optimus Prime and Gregg Berger as Grimlock. Other actors return to reprise their roles from Transformers: War for Cybertron.

Fall of Cybertron received generally favorable reviews from critics. Critics generally felt that the game was true to the Transformers franchise and provided good fan service, but some thought that the story pace slowed at times. Gameplay was mostly praised, but some reviewers cited the removal of War for Cybertron's cooperative campaign as a low point. Graphics and audio also received broadly positive comments. A poorly-received tie-in titled Transformers: Rise of the Dark Spark, which is partially set between War for Cybertron and Fall of Cybertron was released in June 2014.