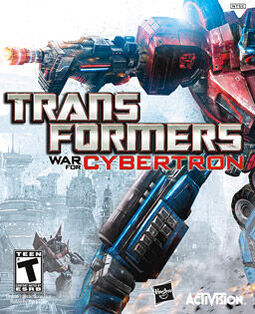 Transformers: War for Cybertron is a third-person shooter video game based on the Transformers franchise, developed by High Moon Studios and published by Activision. It was released for Xbox 360, PlayStation 3, and Microsoft Windows in June 2010. Two portable versions were released for the Nintendo DS, one featuring an Autobot campaign, the other a Decepticon campaign. A game for the Wii, Transformers: Cybertron Adventures, was developed by Next Level Games and utilizes the same characters and setting as War for Cybertron.

Set on the Transformers' home planet of Cybertron, prior to their arrival on Earth, the game depicts the deadly civil war between Autobots and Decepticons. Players may pick either faction, as each has their own separate campaign (though the Deception one is chronologically the first one). The game's plot revolves around a substance known as Dark Energon, a more dangerous and destructive version of Energon, which powers the Transformers. While the evil Decepticon leader Megatron seeks this substance for himself, believing it will allow him to return the planet to its "golden age", the Autobots, led by Optimus Prime, attempt to stop him, knowing it would instead doom their homeworld.

War for Cybertron received generally favorable reviews, with many viewed it as an improvement over past Transformers games. It was praised for its multiplayer, character designs, and voice acting, with criticism given to the visual design of the game's setting. A sequel, Transformers: Fall of Cybertron, was released in August 2012